Update Part 2 (from the road to Eldoret)

This in not an official U.S. Department of State (DOS) blog and the
views and information presented are my own and do not represent the
Fulbright Program or the DOS.

The great start to my work week continued on Tuesday when I worked with Pharmacy Interns at Mulago National Referral Hospital.  I met with Robert and Mandela up in the 4C pharmacy as we spoke about a patient they had been taking care of with end stage renal disease (the patient’s kidneys shut down for good) who had just been started on hemodialysis. This was going to be the patient case they will present on Thursday at tenon conference.  Like the Makerere Pharmacy students, these interns were very attentive and engaged in our conversation. Although I find they struggle with the same patient care issues that my students at Wilkes do, the solutions are not always as straightforward.  These interns had relied on the estimate of the patient’s renal function written in the chart by the medical team because they didn’t have the patient’s weight, which is necessary to
perform the calculation. In the US, I would just tell my students to go weigh the patient or nicely ask a nurse to do it which would be accomplished very quickly. Here, though, there isn’t a scale to be found so I explained to the students how we have to think “out of the box” and can use our best educated guess by comparing the person’s height and weight to their own height and weight, which they know, and  adjust accordingly. It was a true pleasure to work with Mandela and Robert and I’m sure they will do well with their presentation on Thursday. 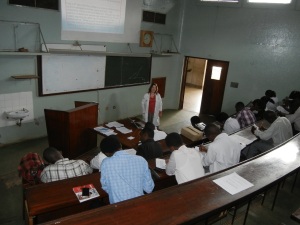 After this meeting, I gave an educational session to all of the Mulago Pharmacy interns on  how to be a Preceptor for the Makerere students that would soon be coming to the hospital to work with them on Pharmacy Rounds.  This is a fairly new concept because the minimal experiential training at the hospital in the current curriculum is not routinely supervised.  We’ve learned over the years in the USA, how important it is to have students practice and use their skills in the provision of patient care all throughout the Doctor of Pharmacy curriculum. 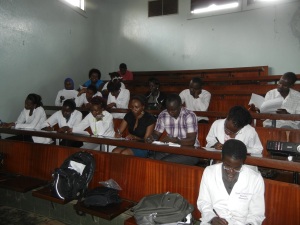 The Interns were fully engaged in the Preceptor Training Activities. There was a worksheet to fill out as we went through the presentation.

It is when using the newly learned skills that the students see how they can help patients and this in turn motivates them and provides a more specific context to didactic learning components.  My personal opinion is that if it were feasible, my pharmacy students would be in the practice setting on a regular basis from the very beginning of pharmacy school
and the didactic components would be reduced in favor of learning by “doing”- the ultimate Active Learning strategy.  We would more clearly tie the practice of pharmacy to the classroom. The “classroom” though, doesn’t need to be in a building. It can be at the patient’s bedside or in the micro lab.  It could be “in the cloud” as students actively
research and learn in a self-directed manor or in the aisles of the community pharmacy helping customers choose the best over the counter Meds (those where a prescription isn’t necessary).   As I left the lecture to the Interns, I was again feeling quite joyful! My work here is progressing along so nicely. 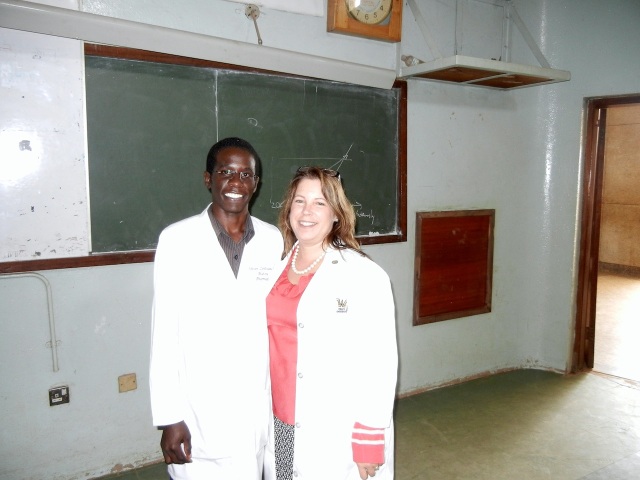 Steven is the Intern Leader and was my right hand man in setting up the sessions and making sure the Interns were prepared to work with me on their cases.

1 Response to Update Part 2 (from the road to Eldoret)