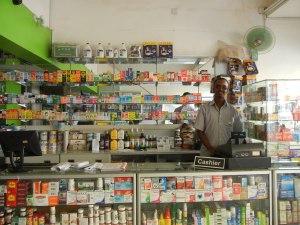 A New Community Pharmacy in Kampala

I spent most of the day meeting with the Professor with whom I’ve been having email conversations for the past year and a half.  It was so great to finally meet him in person!  After talking a bit, we got down to the business of trying to figure out where my research approval was in the process and if I will be able to get approval to speak with people in Masindi.  A couple of weeks ago, I was notified that the process of approval was delayed in the Ugandan President’s office and that I should email someone for provisional approval.  But, since I was already in Tanzania and without Internet access that was difficult. I finally asked my colleague back in PA to email on my behalf but as of yesterday, he hadn’t heard anything.  Well, today I have very good news.  The Professor took me to the government research office, the Uganda National Committee for Science and Technology (UNCST) to investigate and coincidentally, they actually sent me an email this morning saying that my project was approved pending provision of a letter of collaboration from the Professor at MakCHS.  It also said they were missing copies of the RS6 forms that I had sent from the US as well as some of the passport photos.  So, we headed back to the University, the letter was written, and we copied the forms that, thankfully, I had brought with me.  I couldn’t do anything about the passport photos but was hoping that since the missing ones were from the student who is not actually in Uganda with me they would still process the paperwork. Also, the letter instructed me to pay the $300 USD research fee so I was going to have Wilkes University process the wire transfer but since that may take 48 hours and slow the process, I decided to withdraw the equivalent Ush from the bank and manually deposit it into the correct account.  I was able to successfully manage this at the bank and then with all the documents we headed back to UNCST.  And, guess what?  When we arrived with the copies of the RS6 forms, we were told that they weren’t needed and that it was just the passport photos.  When I said that I had sent them, the file was checked again and thankfully, the photos were there- they were just stapled to the wrong form.  So, now my file is complete and I have been told I should have the approval letter by this Thursday or Friday.  Needless to say, I will be saying a prayer for expediency.  We are leaving for Masindi tomorrow and by Thursday afternoon will be ready to start interviewing participants, if we get the approval.

I was so glad that the Professor was willing to run all over town with me to get this taken care of.  And in the process, I was able to get a much broader view of the city.  We ate lunch at the café by the golf course in a beautiful setting.  There appears to be many, many faces to Kampala.  There are areas that are clearly “slums” and then there are buildings with marble steps and excellent views of the city.  Kampala is a city made up of several hills (7 large ones) and everywhere you look you can see them.  In the afternoon we toured some community pharmacies.  It was interesting to learn that pharmacists can “prescribe” medications for patients who come in seeking advice that in the US are on prescription only.  For example, if a patient has complaints that sound like a sinus infection, the pharmacist can dispense antibiotics.  In the evening I went to another restaurant with my hosts.  This one was on top of one of the hills and overlooked Lake Victoria.  It was a beautiful view and I tried to take some pictures but they won’t be able to capture the scene adequately. Also, the meal was delicious. Most of the food I’ve eaten since in Africa has been “local fare” and includes several starches, including mashed plantain, cassava, potato, rice, along with maybe some pumpkin or beans and then served with a meat or vegetable sauce that you pour over everything and eat.  It is tasty, but it was nice to have a steak this evening.  Tomorrow morning we head out to Masindi to continue our adventure.  Talk to you later. 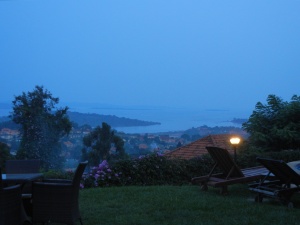 Professor, Department of Pharmacy Practice Binghamton University School of Pharmacy and Pharmaceutical Sciences Binghamton, NY USA
View all posts by kbohan →
This entry was posted in My Safari (My Journey/Adventure). Bookmark the permalink.