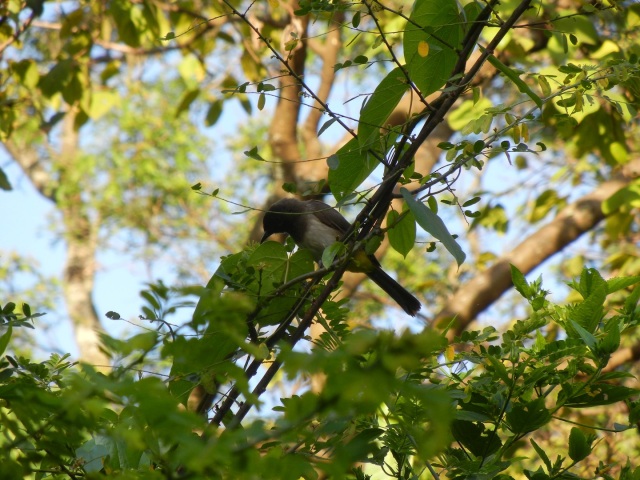 Today I’m going to tell you a little more about my life here in Kampala.  I start the day around 7am when I wake to birds chirping.  I’ve been taking my shower at night because you can get really dusty and dirty walking around the campus when it has been so dry.  It is actually supposed to be the “rainy” season, which means daily rains, but not usually all-day rains, and with the rain comes a little cooler weather and the dampening down of the red dirt dust everywhere. But, even though we’ve had a few rains in the past week or so, the rainy season doesn’t seem to fully be here yet. Even the locals are complaining about the heat and lack of rain.  Anyway, upon rising I go fill up my electric teapot that was provided for me and heat the water for some yummy Ugandan tea, as I get ready for the day. When Sammi and Jenna were here they introduced me to a dry milk product that is totally delicious and doesn’t taste at all like the powdered milk I had occasionally growing up. It is called Nido, by Nestle, and I use that in my tea. They had brought some with them but I found some in the market here.  My breakfast has been cereal with the Nido milk.  I always bring a big jar of peanut butter with me. I figure if I can’t find anything else to eat, I can always live on peanut butter.  My first week here, I ate peanut butter on bananas every morning but when Sammi and Jenna left, they gave me all of their leftover food, which included some Life cereal.  So, I started having that for breakfast. This week I had to get more cereal and bought some Muesli that has dried fruit in it- Vicky told me it was the brand her mother used so I figured it would be fine. It is really  delicious. I was surprised at how expensive the cereals are. Here fresh fruit and veggies are quite inexpensive but anything packaged costs a lot.  Some of the cereals, that I didn’t buy, were in excess of 20,000 UGX-about $8/box! This was the price for an ordinary size box of Honeynut Cherrios.  Once I have eaten and am ready for the day, I sometimes do a little computer work, like write a little on the blog or check emails.  This week I’ve been heading to Mulago National Hospital to work with Patrick and the pharmacy interns so Professor Richard has been picking me up at the Edge House around 8:50am to drive me there.  It is a walkable distance- the medical students in the big house do it everyday- but it is not an easy walk because of the hills and the traffic and boda-boda’s (motorcycle taxis that are all over the place and drive crazy-like and go up on the sidewalks).  It takes the med students who are in good shape 30min and I have decided not to mess up my bad knee by trying this walk.  For anyone who read the blog when I was here last fall, you know that I came to Uganda right after knee surgery for a torn medial and lateral meniscus and to clean up my bad arthritis. I had to come with a cane that trip. I am much better now, and do most walking without any difficulties but I am trying not to stress the knee too much.   Ok, so once I’m at the hospital I’ve been meeting with Patrick or other pharmacists to learn more about their practice and desire to improve pharmacy services.  I also work with the pharmacy interns and help them to review patient cases and teach them how to identify all of the drug therapy problems. Today and next Thursday, I will facilitate their Grand Rounds where all of the interns get together and present patient cases to each other.  I will help them to better understand the patient’s drug therapy and discover if there are any issues they should address with the physicians so that the patient’s care is improved. 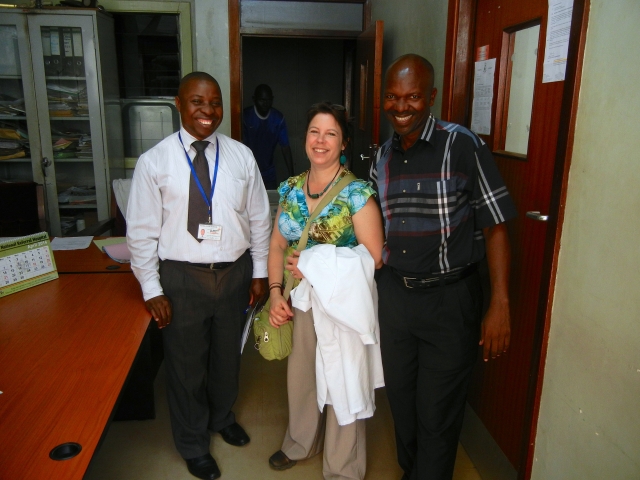 Above is a picture of Patrick, Benjamin, the head pharmacist for the Uganda Cancer Institute (UCI), and me.  I have worked with Benjamin since the 2012 trip. He is very dedicated to improving the healthcare of patients at the UCI by making sure the center is procuring drugs that are efficacious and safe.  Recently Benjamin was quoted in an article in the New York Times (14Feb2014), on the FRONT page, regarding the lack of quality in some of the drugs the UCI has obtained from manufactures in India.  In fact, Benjamin has been such a strong advocate for safe and effective drug use that he has convinced the government to increase his funding so that he can purchase drugs from more reputable sources.  He told me today that he was asked to accompany a team of investigators to India in May to look further into the issues with the production of substandard drugs and to see how the drug companies are going to improve their supplies.

At the end of the day, Richard picks me up and takes me back to the Edge House.  When I’m with the pharmacy students, we always look forward to going out to a nice dinner where we talk and debrief the experiences of the day. But for this trip, I’m on my own and dinner alone isn’t that enticing to me. I’m also on a stricter budget so I’ve been making my own simple dinners.  For lunch I eat the local foods at one of the hospital canteens and that consists of rice with g-nut sauce (like a peanut sauce) and then sometime a beef or chicken sauce or just a bean sauce.  So what do I cook for myself? Well, since I knew I would be cooking my own meals, I brought a couple of things from home just in case.  In addition to the peanut butter I brought foil packs of tuna fish and Spam.  Yes, spam. I thought that scrambled eggs would go great with the Spam so that along with some sliced tomatoes are a meal.

This is the whole picture as I eat my dinner in the kitchen, while listening to an audiobook on my iPhone.

More recently I bought some onions, tomatoes and green peppers and some quick cooking noodles and have made noodles topped with stir-fried veggies.  Tonight I made up tuna with mayonnaise and had that with sliced tomatoes and some pita bread.  So all in all, I’ve been eating quite well here. 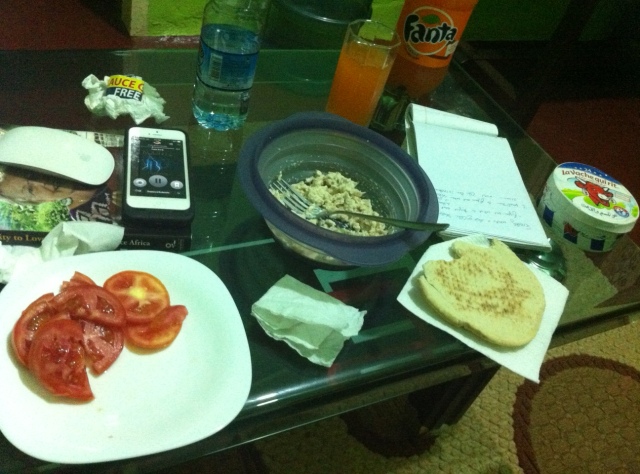 In the evening I usually shower and write a blog entry or complete some unfinished work for the day and then go to bed around 10 or 11pm.  Oh, I can’t finish without telling you about the loud goings on about campus the weeks I’ve been here. They are in the midst of elections for the Campus Guild President and every single night there have been bands playing and rallies. These last until 11 or later each night.  There are flyers with the candidates pictures up all over campus- this election is quite a big deal.  The whole thing is way more elaborate that on the Wilkes University campus or any other campus I’ve seen in the USA. I mean, we might have some posters and a rally day or two, but here at Makerere University, every night for several weeks has been a rally and band or DJ!