A Great Weekend in Kampala

My first full weekend in Kampala was great. I spent much of the time working on further development of my Pharmaceutical Care Skills Lab curriculum and the plans to bring the pharmacy students to Mulago Hospital for Pharmacy Rounds, but there was still time for socializing. On Saturday I went shopping and had a nice lunch with my friend, Vicky, who is a pharmacist at a smaller government hospital, China-Uganda Friendship Hospital- Naguru. She is one of the pharmacists who came to the USA to study Pharmaceutical Care in action last fall. 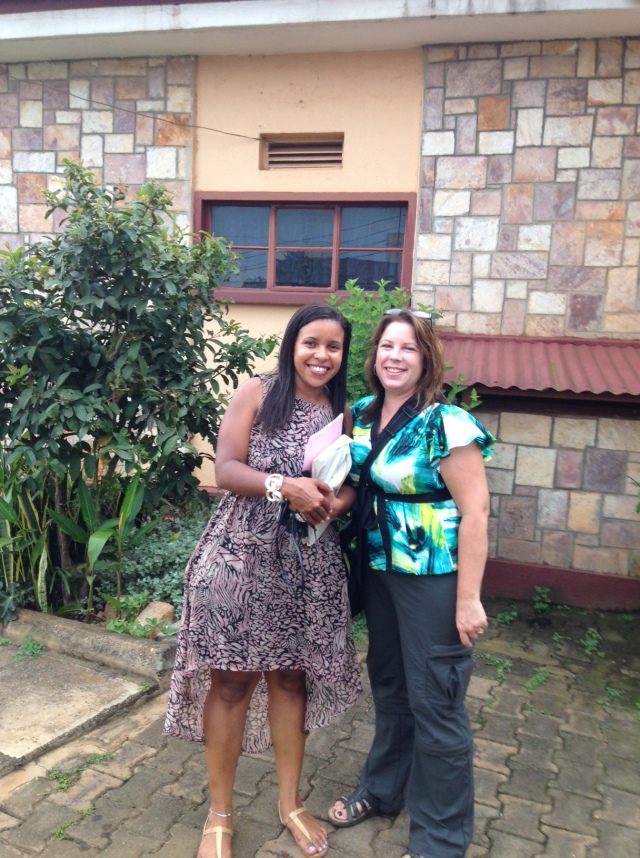 Vicky and KarenBeth at her Mom’s home in Kampala, Sat. 31Aug14

We went to a local, bustling, western-style shopping center to get some groceries but also to try and find a charging cord for one of my mobile phones. It is an old, non-smart Motorola phone, which works fine, but the charging cord no longer does. I carry 2 phones while in Uganda with SIM cards from 2 different phone carriers. The mobile phone networks frequently have short-term outages (or sometimes longer term) and it is helpful to have more than one phone as a back up to your primary line. Actually many people carry even more than 2 phones so they have more carriers to choose from. Another reason they have more than one phone is that the way you make calls is to buy “airtime” and add it to your phone- like scratch-off lottery cards. And, if you run out of airtime on one phone, and you either have no money or aren’t near an airtime seller, you can just switch phones. Well, so far no luck in finding a new cord but we are still trying. I did successfully buy groceries and then we went to a bar/restaurant at one of the Rugby practice fields. We both had delicious pan-fried pork with a barbecue-type sauce and “chips”- French fries. I try not to order the French fries too much around here because they are really good, too good, and I can eat a bunch. I’m not doing much fancy cooking here but my housemate, Monty, made a delicious whole chicken on Saturday night. Since our oven doesn’t work, he made it like a stew and cooked it whole in a pot on the stove for hours with a variety of vegetables and some G-nuts. The “G” stands for “ground” nuts but these are not ground up but rather grow on the ground like peanuts. In fact they are basically a type of peanut but I have to say I like them a lot more than peanuts- they are small and I like them roasted and salted. They are nice and crunchy. Anyway, the chicken turned out great and was oh so tender! This is not commonly so with meat from small restaurants that cater to the local crowd. I’m not sure why because what they usually cook is stewed as well. 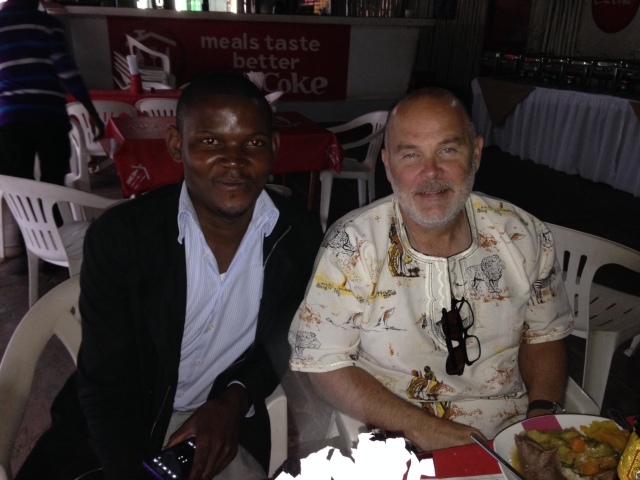 Lunch at a Campus Canteen after Church with Ivan and Monty (my housemate and fellow Fulbrighter), Sunday 31Aug14

On Sunday, Monty and I walked down to the Roman Catholic Church to attend the 11am service, which lasted a good 1.5 hours. The large church was pretty full with young people and young families, since it is on the Makerere Campus. The choir was great and I especially enjoyed watching the man playing the Maracas, these are the handheld percussion instrument that looks like they are made out of gourds. He not only shook them to the beat of the music, but he joyfully danced the whole time. The words to the music were projected onto the wall at the front of the sanctuary and some of the songs were in Lugandan and some were in English. I knew most of the English songs. The Priest gave a great sermon that spoke to my heart. I found out later he has just recently returned from serving a parish in California for 7 or 8 years! (He is native Ugandan.) As the church service was about the end, the sky grew dark and the wind began to blow. The light inside the sanctuary seemed to go out but it was really just the dampening of the prior sunlight. Monty and I were planning to go to a little local canteen on campus for lunch and we had to walk quickly to avoid the large pending storm. We ended up walking though the beginning light rain but were safely inside when the heavens opened up. We met a recently graduated Ugandan University student for lunch- a young man whom Monty met last week. We had to almost scream at each other to carry on a conversation through the din of the rain pelting down on the corrugated metal roof. The café was having a buffet and my meal is pictured below.

This is a typical Ugandan meal after church on Sunday 31Aug14 at one of the Campus Canteens.

From the bottom center going up clockwise the food is as follows: Millet (a wheat-like grain that is stirred into boiling water just like making oatmeal- it has the consistency of oatmeal that has cooked too long and has lost its moisture and is now thick and sticky); Matoke (this is the typical Kampala starch- boiled banana that is then mashed and steamed in banana leaves-it has the consistency of mashed potatoes that have cooked too long and are too thick and dry); pumpkin (which is really just a winter-type of squash- I love this!); all the white stuff is white rice; the sauce that is green is basically like pea soup with carrots- it was super delicious; finally the brown lumps in the middle are big pieces of beef. The sauce the beef was cooked is was really yummy and I had that all over my rice and I was looking forward to eating the meat pieces- they looked soft when they put them on my plate- but they turned out to be too hard to cut with a butter knife, which is the only kind of knife they had- so I had to leave them behind. Although the Millet and Matoke aren’t my favorite, I do eat a little bit of each and if I only had that to eat, I would certainly survive. Oh, I shouldn’t forget my Coke Zero. This is the first time since arriving that a restaurant had it in stock. It is actually the only diet soda that they have in Uganda (at least that I’ve seen or heard about) and it only arrived maybe a year ago. I’m not a huge soda drinker so not having a Coke hasn’t been a problem at all, but it was a nice treat today.

2 Responses to A Great Weekend in Kampala