A Visit to the AMPATH Program in Eldoret, Kenya

This in not an official U.S. Department of State (DOS) blog and the
views and information presented are my own and do not represent the
Fulbright Program or the DOS. 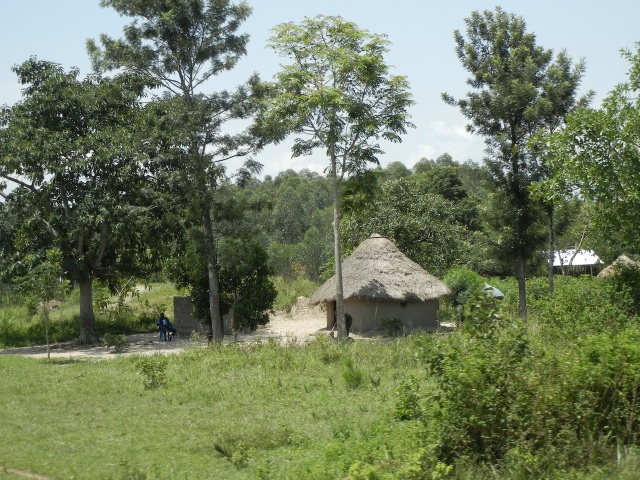 A traditional Ugandan hut along the road to Eldoret, Kenya

On Wednesday I had the fun experience of a road trip to Kenya with Professor Odoi and one of the other faculty, Kalidi.  We started off at about 10am and although this was later than originally planned (7am), I think it worked out even better. Although the traffic getting out of Kampala is usually horrible, this seemed to be the quickest ever for me.  Now we did run into traffic jams along the way (referred to simply as “a jam” here), mostly due to road construction, but overall it wasn’t bad.  We drove with the windows open and watched the road go through many small villages with active open air markets and the lush, green countrysides dotted with farms growing bananas, tea, cassava, and other crops.  There are also areas of thick forest. Along much of the way we passed by fields and fields of green stalks which turned out to be sugar cane.  Adobe red dirt roads run parallel
to the highway at times and perpendicular branches lead to homes and villages that can’t be seen from the main road.  The radio played in the background as I worked on a blog post.  The music was a mix of African tunes in a language I didn’t understand with rhythms to make you want to move as well as contemporary soft-pop music.  I had to
smile when the song, Call Me Maybe, by Carly Rae Jepson, came on as it brought me right back to 2 years at during the summer Olympics when the USA swimming team made a lip sync video that quickly became “Trending” on social media. As we drive by the small market intersections, if the traffic slows down, hosts of street vendors approach the vehicle with food items for hungry travelers.  They smell delicious but I abstain because I’m extremely cautious with the food I take so I don’t become ill.  The items include roasted chicken and beef on a stick and roasted bananas, without the peel. I could have also purchased bottled water or soda and regular bananas with the peel.  Since I brought g-nuts with me, like peanuts, I’m fine with these for a snack.

Typical scene along the drive to Eldoret, Kenya (on the Ugandan side of the border)

We reached the crossing of the Victoria Nile River to enter Jinja via the bridge over the Owens Falls Dam, which provides electricity to much of Uganda, in about 2 hour, which was good timing.  We finally got to the Ugandan-Kenyan border at about 2:30pm. You first have to clear the Ugandan side by getting your passport stamped and the car has to go through a process as well.  Then we went to the Kenyan side and were checked over for signs and symptoms of Ebola. Basically they just looked at us and took our  temperature.  Then I had to fill out the form for the Kenyan Visa, pay my $50 US dollars, and get my Visa stamp.  Finally after we all cleared it turned out that the car had to
have Kenyan insurance so that was an unexpected expense.  But, finally, we got back on the road.  Through the whole thing a guy on a boda-boda walked us through the process which made it much smoother. He demanded some payment at the end but it was worth it, I think.  I’m not sure how you would know what to do without him, if it was your first time. 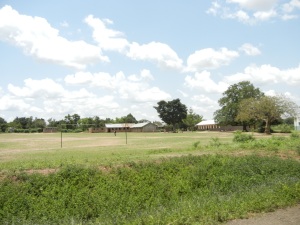 A Ugandan school along the way

The Kenyan side of the border here is basically identical to the Ugandan side except for not seeing as many villagers dressed in traditional tribal wear.  We did have to change some money, though, as they don’t have the same currency as Uganda and I may have some trouble some trouble communicating since Swahili is the national language.  The group we are meeting, though, will speak English.  The road thru Kenya was pretty poor in spots due to massive construction and I think we finally arrive at our destination at 6:30pm, much longer than anticipated. We were expected, though, and had a really nice dinner and conversation with some of the AMPATH pharmacists and then got a really good nights sleep. 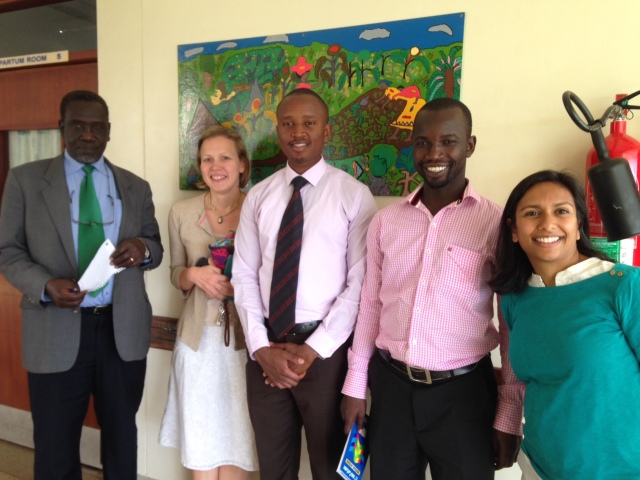 Standing in the beautiful Mother-Baby Hospital; the artwork was done by a patient (right to left: Richard, Susie, Dennis, Kalidi, Rakhi)

So, I guess it is time to tell you the reason for this road trip.  We went to visit  Purdue University’s global health pharmacy project in Eldoret.  We wanted to see what we could learn about the way they developed their pharmacy training programs and how they have made significant advances in the practice of pharmacy in Kenya at Moi Referral and Teaching Hospital.  We were hoping to gain information that would help us determine the next steps in our process to advance pharmacy practice in Uganda and investigate possible ways of collaborating. Purdue University School of Pharmacy involvement in Eldoret is part of the AMPATH program, which stands for Academic Model Providing Access to Healthcare. It is a joint program of several medical schools, including Indiana and Brown Universities, and Purdue University School of Pharmacy.  The origins began back in 1988 to develop a Medical School at Moi University in Eldoret, Kenya and evolved to become a massive project to help provide access to HIV medications to improve patient health outcomes.  At first the project mostly involved training for medical doctors but Purdue University School of Pharmacy joined the efforts to train pharmacists as healthcare providers back in about 2007 or so. 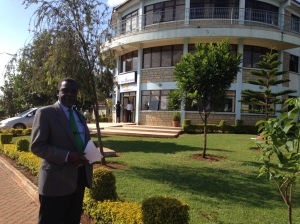 Richard Odoi stands in front of the Mother-Baby Hospital

Fast forward to present day and they now have 2 full time Purdue Pharmacy faculty members placed permanently in Eldoret who run a training program for Kenyan Pharmacy Interns that rivals or surpasses the training of US pharmacy students.  They also run a Residency Program in Global Health for US Pharmacists and Kenyan Pharmacists.  In addition they host Purdue Pharmacy Students 4 times a year for 8 weeks each time for a total of 24 students for a Global Health advanced pharmacy practice experience. They provide many services to the patients at Moi Referral and Teaching Hospital in addition to care for HIV patients including running an anticoagulation clinic, a home blood glucose monitoring clinic for diabetics, a rounding service on the adult medicine wards and in a new Cardiac Care Unit.  They have started some really unique projects, one involving a special program to provide medications at lower cost through a revolving fund pharmacy program so patients get their prescriptions filled and are adherent to regimens. 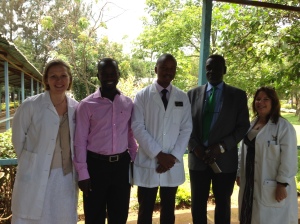 There is also a micro finance project that somehow rewards patients for keeping their follow up appointments to get their diseases under better control. They are working with a scientist from Notre Dame to test a point-of-care detection program for identifying counterfeit and substandard drugs where the tablet just needs to be scratched across a card and then with water added, the card turns colors and the pattern tells you whether the drug contains any active ingredient.  Rakhi Karwa, one of the Purdue pharmacy faculty, and Mercy Maima, one of the Kenyan Residents gave a really interesting talk to us and the rest of their pharmacy crew about the scope of the worldwide counterfeit problem and this new detection system.  Apparently about 10-30% of drug products may be counterfeit or substandard. This is something that we in the USA are just not routinely aware of but this problem isn’t just for the developing world. Back in 2012 a bunch of counterfeit cancer drugs were detected and had been administered to patients.  There are many other projects that I can’t remember but one is developing a new chronic care management program.

This is some of the AMPATH Pharmacy Staff- the Kenyan Interns and Residents and American Residents (Left to right: Edith, KarenBeth, Tabitha, Benson, Chelsea, Liz, Susie, Blenda, Dennis, Richard, Kalidi)

Both the Makerere Faculty and I are returning to Uganda filled with new ideas to grow our efforts to train pharmacists to provide a higher level of patient care and improve their health.  This trip was immensely successful and we are more motivated than ever to be successful. Rakhi and her crew gave us much food for thought and we all think this is the beginning of a new collaboration.  One thing that was truly evident and came up over and over again in our conversations is that the primary way forward is to always keep the patient at the center of all of our projects- they will be the reason for our change- and if we are all one in our efforts to help patients, we will succeed. There is still a lot of work ahead and we know our program will take time to show improvements but now with a hop and a skip in our steps we will progress onward.