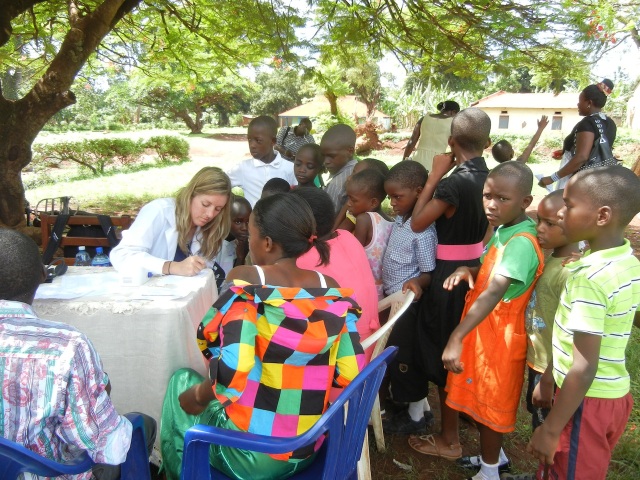 Hanna, the pied piper, had children lining up to see what was going on and to have their BP taken.

Wrap the cuff around the arm, apply the bell of the stethoscope to the antecubital space (inside of the elbow), pump, pump, and pump some more as the dial goes up and up and up, then slowly release the knob to let the air out and then finally, carefully read dial as it descends through the numbers listening for the first drum beat through the stethoscope and then the cessation of all sounds to determine the blood pressure (BP) reading. This procedure can be life saving as it can discover people who are at risk for developing heart and kidney disease that can lead to stroke, heart attacks, and death. 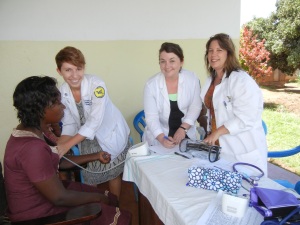 Amanda, Lizzie, and Dr. Bohan at All Saints Church

Today the Wilkes students and St. Joe’s Pharmacy Resident completed this procedure about 252 times while they screened parishioners at St. Matthew and All Saints Church in Masindi, Uganda. In fact, most people who had a high reading were tested at least one more time, to double check. We were able to identify 84 people (33%) who had high readings and 33 (13%) had extremely high readings and were referred to seek medical care as soon as possible this week. Although there are plenty of medical clinics around, some of the patients with high BP that I counseled admitted they had never had it taken before and also had not ever seen a doctor. 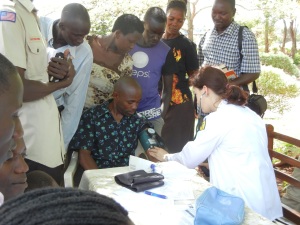 Identifying people with high BP is the first step in improving their long-term health, but unless they follow through with treatment, which will probably be daily medication(s) for the rest of their life, patient health outcomes won’t be actually altered for the better. There are many barriers to sustained medical care that will have to be overcome and when you consider them, it is easy to get discouraged and wonder if we are really making a difference. The majority of people in Masindi live on extremely modest incomes and affording regular medication is nearly impossible for most. Think about having to make the decision “Do I pay my kid’s school fees* or purchase my BP medicine this month?” If they seek care through the government health system, medications will be free but unfortunately, you can’t always rely on the medications to be available every month. Using a private doctor or clinic is much more reliable in terms of available medications and healthcare providers, but this will cost the patient some amount of money. 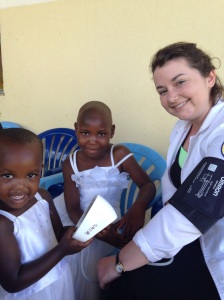 Lizzie had fun playing with the children too! She not only had her BP taken but also had her hair braided.

Another factor is lack of education about illnesses that we in the developed world are well aware of. Just about anyone you ask in the USA probably knows what a heart attack or a stroke is and that medical care and drugs can be helpful. In the developing world, this may not be common knowledge and trying to explain it is difficult. There is also poor comprehension about the concept of “preventative care”. In fact, this applies to not only to personal healthcare but also items like cars and generators. During one of my trips to Masindi, the hotel’s generator stopped working. A generator is a really critical piece of equipment here because the electricity commonly goes out for some amount just about every day and often is out for days at a time. That time, though, the electricity went out and the generator broke down. It turns out that the reason for the malfunction is that no one had done the preventative maintenance necessary and let it run without oil. 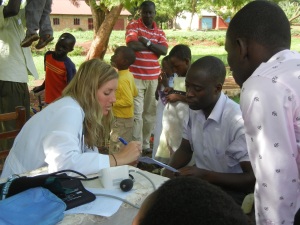 We spoke to all of the patients who had high BP to give advice. Much of the time the patients understood and spoke English but when Runyoro was their best language, we had the help of 2 wonderful translators.

I don’t really know the route of the problem but suspect it has something to do with not having a lot of money to do the upkeep necessary but I think they also don’t understand the concept of paying a small amount to keep equipment or your health in good shape so that you don’t have to pay catastrophic fees later. But, we have to start somewhere and identification of the health problem (elevated BP) and discussing the potential benefits of treatment is what we are able to do when we just come here once a year. People are starting to remember us, though, since this is our 3rd time doing BP screenings at these 2 sites. In fact, one patient actually came with his 3 prior BP readings on the cards we provide! 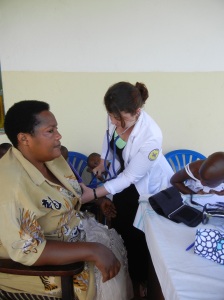 Lizzie at All Saints Church

All of the crew agreed their work today was really fun and they had a great time- it was a 10/10 experience and they would “do it again!” There were lots of children hanging around watching us and at one time, Hanna had 2 lines going where she was measuring the little kids BP with the automatic cuff while she took the adult’s BP with the regular BP cuff. One story Amanda recounted to me was pretty amazing. She got herself a mint and saw a little girl watching her and so she offered her a mint. She promptly put it in her mouth to soften it up and then bit it into pieces and gave it out to the other children there. The extent to which they share and care for each other is really touching!

*Most children go to one of the many private schools available and those prices range from really low but likely low quality to really high providing a high quality education. There are free government schools, but these are considered poor quality and even when utilizing them, parents still need to pay for uniforms, shoes, writing tablets, and pencils. Education is something that is highly valued in Uganda, as most parents know that sending their kids to the best schools they can afford is the most likely way to advance their financial status and position in life. 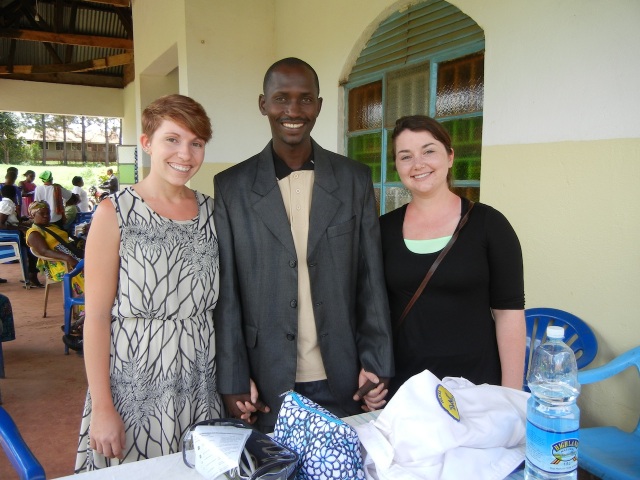 Amanda and Lizzie with Jackson, the excellent translator at All Saints Church 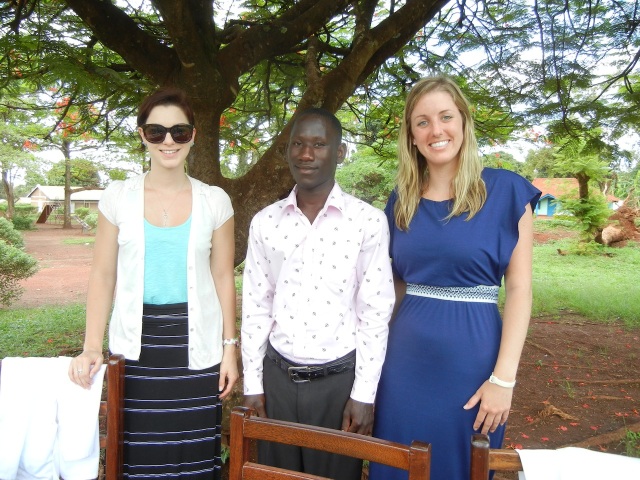 Kristen and Hanna with Godwin, another excellent translator for St. Matthews Church