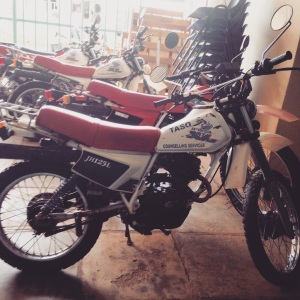 These are the Boda-Boda’s (motorcycles) that the TASO healthcare workers use to go to the field to set up clinics. The supplies and equipment to do HIV testing and CD4 counts along with the drugs follows behind in a 4-wheel drive vehicle with more healthcare workers.

We spent Monday morning at TASO, The Aids Support Organization, once again today. The original plan was for us to spend time in the clinic, checking weights and administering surveys on their general health status. However once we arrived we were told that because of the Easter Holiday the schedule was really light today- only 16 patients were scheduled as opposed to some clinic days when over 150 patients would be scheduled. So instead we were given a really in depth tour of the facilities. We were really impressed by the holistic approach that TASO takes to HIV management. There were patient counseling rooms, education rooms, family planning space, an area dedicated to youth, and a well-organized pharmacy (a rare site to see). We were also shown an area of the property where a little garden was growing. They called this the “demonstration garden” and taught clients how to plant seeds and care for crops at their own homes. TASO also provides certain patients with “starter-kits” for certain careers including farming, hair dressing, and auto-mechanic.

This is an example of the cute huts that are used as patient consultation rooms at the TASO facility in Masindi, Uganda.

After we finished touring the TASO facility we were able to walk down the road to the government sponsored HIV clinic. It was significantly smaller than TASO but did include a counseling room, pharmacy, lab, and physician rooms. The TASO facility does see more patients per day than the government clinic- on their two clinic days they see about 50-70 patients.

One of the most interesting parts of the day was our next stop- we were taken to the SMC (Safe Male Circumcision) tents out in a field across the street. We were told that males from age 10 and up were taken to these tents to undergo circumcision. This has been a huge initiative to help reduce the spread of HIV. One significant caveat of providing such a service is that many men believe they are immune from contracting HIV if SMC is performed. This prompts many men not to use condoms and many women to believe that men who are circumcised are “clean.” Therefore, it is very important that a comprehensive approach is taken to educate both men and women on safe sex practices.

This is one of the Safe Male Circumcision (SMC) tents

When we arrived to the circumcision tents, there were roughly 30 boys waiting (they were brought in from a school with permission slips signed by their parents or older siblings) to be circumcised. Prior to the procedure, each boy would be taken under an awning for a counseling session about the scope of the procedure and how to use barrier contraceptives, such as male and female condoms.

None of the boys who were waiting seemed nervous and there were no sounds of screaming coming from the tent. We were later told that this was a right of passage and that the boys were expected to be calm, cool and collected during the process in order to be deemed “men.” We were told that the boys were not given any topical numbing agents before the procedure and they were only given Tylenol after for pain management.