13 September 2015:  With this blog I’ll tell you about some of my usual activities on the Weekends while in Kampala, Uganda beginning with Sunday and working backwards. 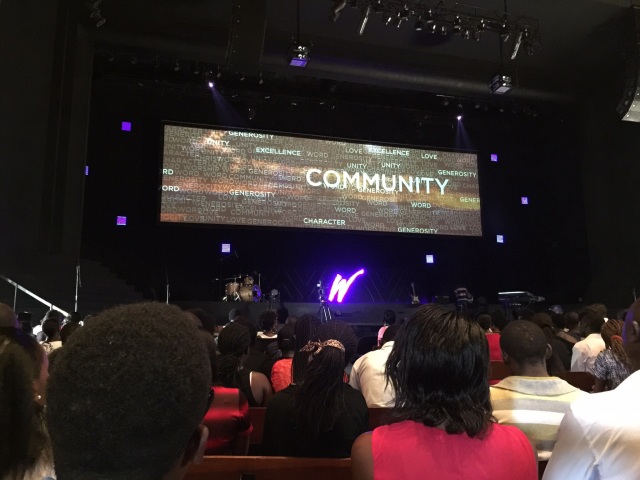 Watoto Church, Downtown Kampala, before the service the large screen runs many interesting colorful slides about their ministries which keeps you occupied while you wait, since people got there so early to get seats

I usually try to attend worship services on Sunday mornings, if at all possible. Both to fellowship with other Christians, but also to learn more about the Ugandan religious practices.  Some of you might be surprised to learn that 85% of Ugandans are Christian with the majority of the others Muslim.  One’s religion is very important to Ugandans in a more public way than for  most Americans. In America, unless it specificially comes up in conversation or we are at church, we rarely talk openly about our faith and religious practices.  Although the majority will state in survey’s that they are Christian, regular attendance at worship services has decreased significantly over the past 50 years and in many communities, Sunday is not considered a “day of rest” or a day which is held sacred to families. Events are often planned that interfere with worship service times such as children’s community sports games or school-sanctioned activities which families are expected to attend.  In Uganda, though, Sunday is definitely considered a “day of rest” and/or “family day” and the worship services and activities often last hours and sometimes most of the day.  In the Ugandan culture, just knowing one’s religion helps them to know much about a person. I usually give my Wilkes student’s a “heads up” about this before they travel to Uganda with me because it will be very likely that they may be asked about their religion during their first conversation with a new person.  In fact when you are at the hospital collecting the demographic information about the patient, their religion is always asked and recorded, along with another interesting fact that we don’t collect, their tribe.  In the USA, this would be equivalent to always asking patients about their ancestry. e.g. Where does your family originate? Are you Irish, Italian, Hungarian, etc? While we do gather ethnicity information about some patients (those who don’t speak English well or who are not US citizens), I think it might actually be really helpful to know every patient’s history.  I suppose we don’t because most American families have been here for generations and perhaps we think the cultures have melded together into the “American Culture”. But despite this, many of the people I know claim their ethnicity especially on holidays, so I think many of their unique cultural habits and beliefs still exist.  Health beliefs such as the use of traditional healers, use of herbal and alternative medicines, thoughts about what to do with body parts that have been removed due to surgery, to the grief and death processes may differ dramatically among tribes and cultures in Africa as well as the rest of the world.  Knowing this information can give insight on how to help an individual patient and his/her family better. In Uganda, not only is this information collected during the admission of the patient to the hospital, but it is also relayed when pharmacists and physicians present patient cases to each other. For example: in the USA, a patient case presentation might start off by saying something like this:  “JC is a 24 year old male who was brought to the Emergency Room by Ambulance after being attacked during a bar room brawl…”  In Uganda, that same case would go something like this: “JC is a 24 year old Anglican Bugandan man who lives in Wakiso District who was brought to the hospital by his brother after being attacked at a bar…” 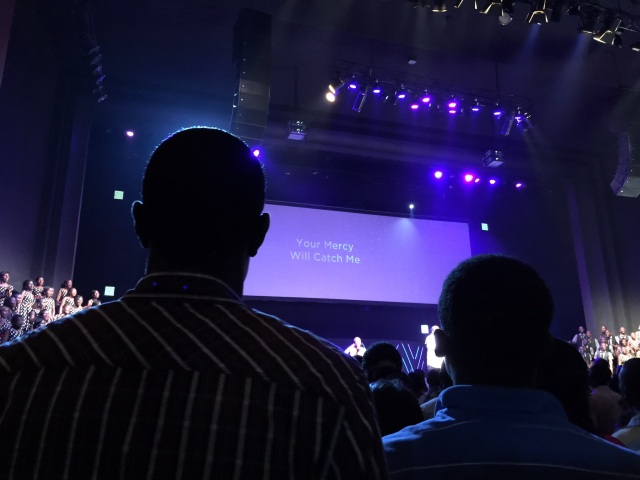 The singing begins…notice the choir standing on both sides of the stage up front. It was quite large- I think maybe 50 people. The women are in black and white polka dotted dresses.

This Sunday I enjoyed attending one of the worship services at Watoto Church in downtown Kampala.  This is a Pentacostal Christian church that was started back in 1984. It has grown dramatically over the years and is know for its Watoto Children’s Choir that sings all over the world and for its ministry to children orphaned by AIDS and other calamties in Uganda.  As you can see from my pictures, if you woke up in the middle of Watoto Church, I don’t think you’d suspect you were in Uganda. The lighting and huge screen look like something you would find in American and you might suspect you were in a large urban church in the USA.  The music, led by a choir that wears fashionable black and white polka dotted dresses, was more than lively!  I thoroughly enjoyed the dancing, clapping, and modern praise and worship music. Thanks so much to Cathy for bringing me. (she is also in the choir- you can just barely make her out in the picture above- she is woman on the top row closest to the left edge of the photo) The packed congregations of Uganda always amaze me.  Every church I’ve attended here has been the same. People come early just to wait in lines outside so they can get a seat in main sanctuary and this one had both a main floor and a large balcony filled to the gills. If you can’t get a seat, there are tents set up outside where the music and video of the service is played.  As I write this, I realized that it IS possible for Ugandans to be on time or even early for events.  [Living on “Africa Time” is part of the normalcy when I’m here. There are few people I work with here who start events on time. Most activities start substantially late, even some University classes. I fit in pretty well here, since promptness isn’t one of my strengths. But as they’ve shown by their church attendance, I guess working on “Africa Time” is not something that is unavoidable.]

The small house to the right of the photo is my home away from home in Kampala.

Saturday morning was Laundry Day for me. While it is possible for me to have the housemaid do my laundry, I actually enjoy doing it by hand when I’m here.  It is pretty easy because when you travel and only bring a small amount of clothes, the pile to wash is substantially smaller than it would be at home.  I do my wash the normal “Ugandan Way”, at least that is what Gonsha told me when she picked me up to go on an outing with her.  I have a large blue basin that I fill with warm water and soap powder in the bathtub. Then I soak the clothes and wash each piece separately by rubbing together. I dump the dirty water and add clean water to rinse the clothes and then wring them out as well as I possibly can. This is what I think is the major benefit of the washing machine. 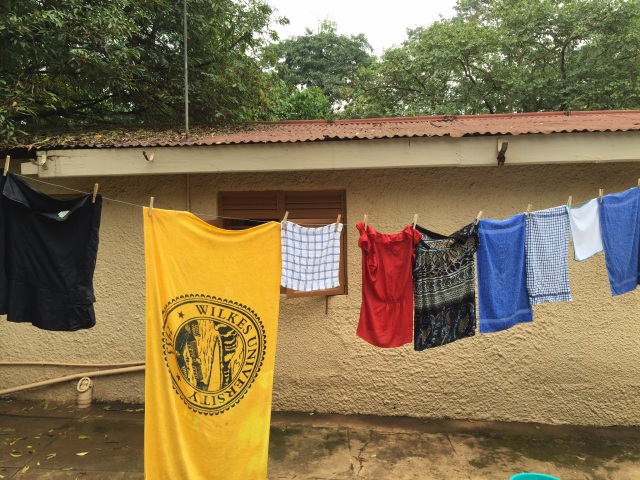 Hanging laundry to dry. My house is in the background. The blue wash bucket is on the cement.

It is easy to do all the other parts, but a washing machine can spin with such speed that it wrings out the clothes to almost dry. Then when they are hung on clotheslines outside, it only takes a short time to finish the job. I also realized that it is actually pretty good both upper body (the wringing) and lower body (the squatting) exercise to wash clothes manually.  One of the pieces was a sweater which needed to be laid out to dry. Before I came to Uganda I never would have thought of this, but a nice sturdy bush is a perfect place to dry a sweater. It doesn’t get stretched out and the sweater can breathe and dry more quickly since the air can move below the top of the bush, unlike when you lay a sweater on top of a towel. 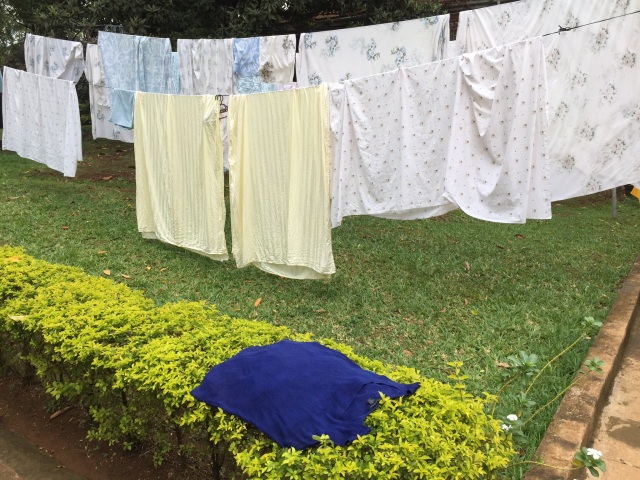 I laid the sweater to dry on a bush, which worked quite well.

The final pictures of this blog are to give you a little hint about what I did with Gonsha the rest of the day. Since most pictures were taken with her camera, I will need to wait until later this week to tell you about the massive amount of fun I had in the afternoon. Can you gues what we did? 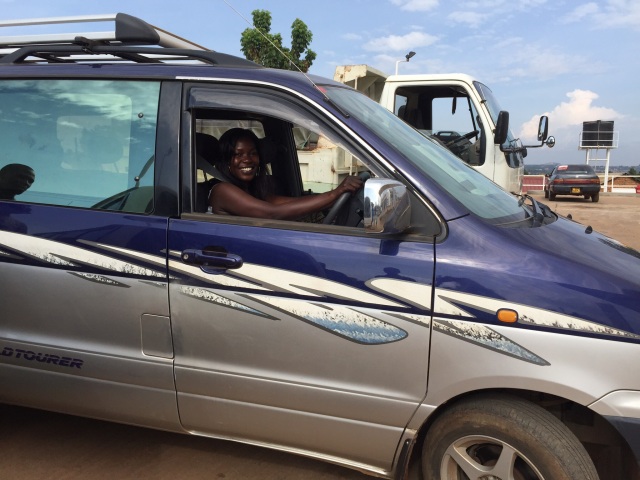 Gonsha picked me up in her new car! 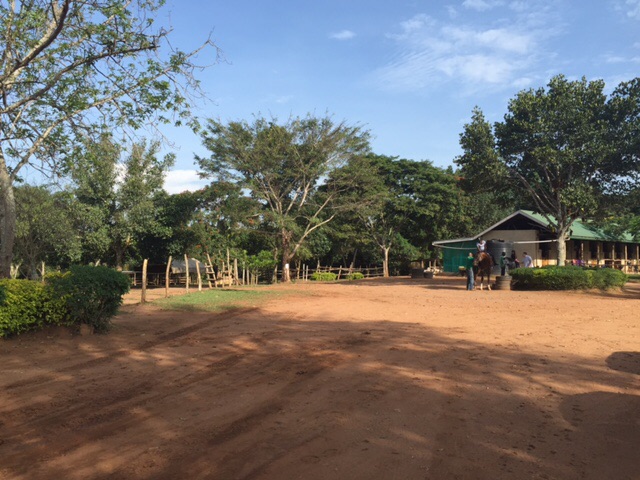 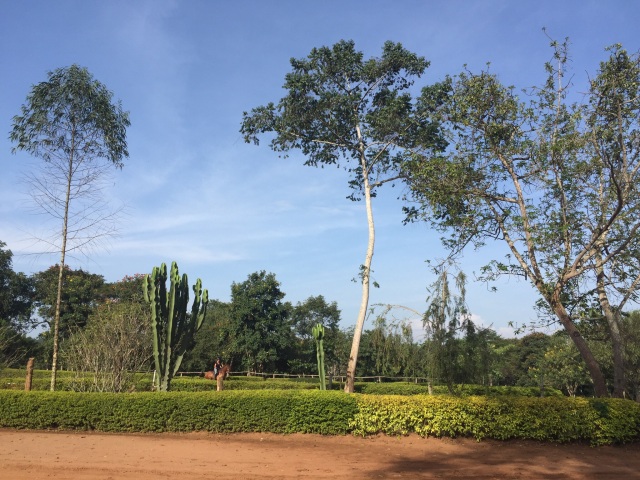