An Obession With A Huge Bird

Marabou Storks on the roof of the Pharmacy School

I’m obsessed with a really interesting HUGE local bird. It’s called the Marabou Stork and they are actually quite ugly but somehow I can’t seem to stop watching them. They nest on the top of tall trees and I can watch 2 nests right from my EdgeHouse window. As I sit here and try to get work done, the noise they are making as they build new nests as well as the sounds their flapping wings make as they take off to find more materials keeps drawing my gaze. Living around these enormous creatures must be what it would have been like to live among the Pterodactyls that lived 228-66 million years ago.  They eat just about everything, so I’ve heard, including any kind of  trash.  Many people think they are a nuisance but some think they help with trash control.  They are all over the Makerere University Campus. They roost high up in the trees. They are so large it’s a wonder they don’t collapse the top branches.  I’ve been trying really hard since I’ve been here to get a good picture of the ones at EdgeHouse but they are eluding me. I’ll see them out my window on the lawn and then I scare them off when I open my loud metal door. 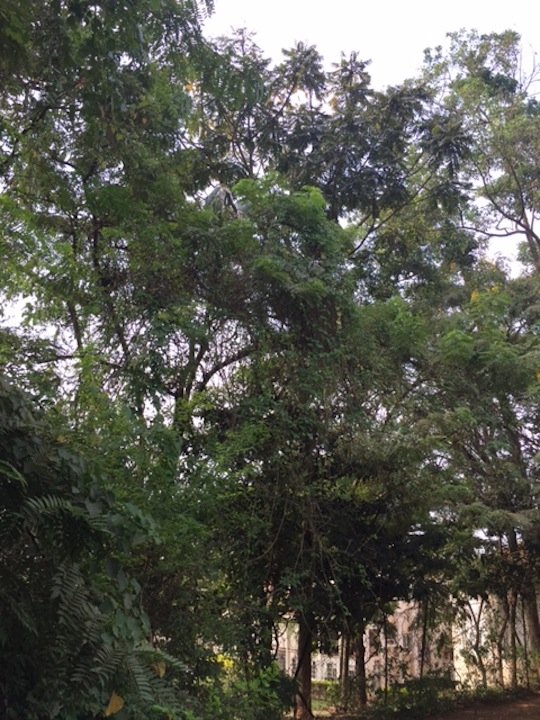 This is the tree where one of the nests is. You can just barely see the birds- in the top 1/3 of the photo, just left of center.

The one time I could have gotten a great picture, I was so focused on getting a movie of it flying that I forgot to take a still photo.  I’m including the movie hear but I could only get the SD version to load so it is a little blurry.

The beginning is slow but what I really want you to see AND hear is at the end when the bird takes off for its nest.  When I get home I will try to remember to replace it with the HD. I’m not sure if this is a Momma or Papa Bird but I’m pretty sure they are building a new nest on top of the tree in the photo. This pair is obviously different from the pair roosting on the roof of the pharmacy school as you can see by their colors. Although they are pretty ugly they really intrigue me. 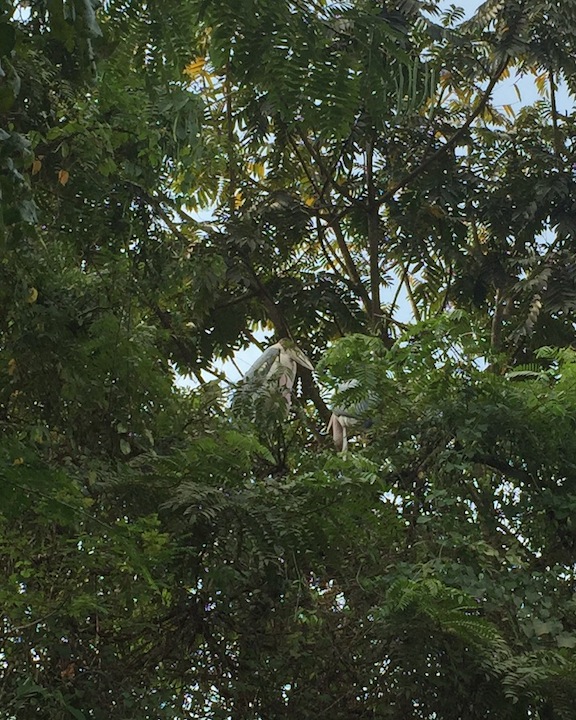 You can see the nest a little better in this photo.

I can’t help thinking about how they are God’s creatures as we are and are preparing for the birth of young ones. I don’t know anything about their mating patterns but they seem to be often in pairs so I wonder if they mate for life like some birds or even if not, maybe the male and female work together to prepare for their young. Regardless, they’ve given me lots of viewing pleasure. When they fly overhead the flapping of their wings and the sounds they make are quite loud. You can definitely hear them coming. So far they seem to be gentle and avoid me, which is just fine. But, if these creature are sometimes aggressive, they certainly would be something to be afraid of.

This is the best close up I could get with the zoom on my phone camera.