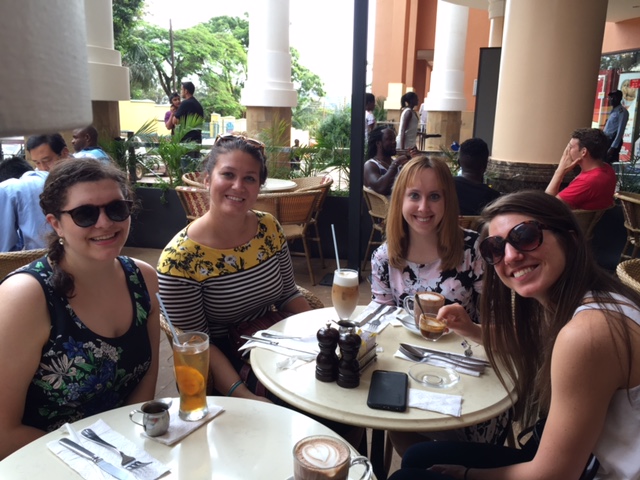 Enjoying a nice dinner after a long day at the hospital at a restaurant in the very modern Acacia Mall in Kampala. This mall has only been open about 2 years, if that.

We spent Friday at Mulago hospital. Makenzie and I were in the maternity ward for half the day and then went over to the pediatric unit. Kassi and Lauren spent all of their day in the pediatric  unit. Makenzie and I had quite the eventful day. We started our day off in the maternity ward helping the pharmacist dispense medications. The standard of care seemed to be:  dispense 3 of the 75mg ampules of diclofenac (pain killer), 2 of the 1g vials of ceftriaxone, and 3 of the 500mg metronidazole IVs (both antibiotics). Here in Uganda patients are given their medications for the entire day in the morning and then the medication is either taken by the patient as directed (hopefully) or if it is an IV medicine,  administered by a nurse. After we finished dispensing medications the pharmacist, Roger, gave us a tour of the ward. WHAT a tour it was. We went to the labor and delivery ward where we saw ALOT. The women here have a curtain in front of the bed but no curtain separating them from the women beside them. There were about 5 or 6 beds on each side occupied and then about 6-8 women waiting for a bed to clear up so they could give birth. Some women were naked and in the middle of giving birth, some were clothed. Only a few were screaming. They do not give epidurals during labor here-only afterwards if they need to stitch the women up. The women here receive diclofenac, an NSAID pain killer, for labor pains. After that we then proceeded into the OR to witness a C-Section. Before we went into the operating room we had to take our shoes off and put crocs on. Just to clarify the crocs were provided for us-we do not own crocs. They just have a bunch of croc shoes sitting on the floor inside the OR and you slip off your own shoe and slip into one of the pairs of crocs.  After we changed our footwear we went into the OR and observed. I had never seen a C-Section before, Makenzie has, so I was quite stunned. It seemed as though the surgery went well and the mother gave birth to a baby boy! They asked us if we wanted to watch and observe the mother get stitched up-at this point I was nauseous and overwhelmed  so I asked to opt out and leave. After we put our normal shoes back on we went over to Jeliffe, the pediatric ward, and met up with Lauren and Kassi. Lauren and Makenzie went to the sickle cell patient unit and Kassi and I stayed in the cardiology/pulmonology unit. Kassi and I saw patients with suspected bronchiolitis, pneumonia, HIV, heart failure, and endocarditis. Lauren and Makenzie were in the hematology unit where they saw multiple sickle cell patients. They discussed different antibiotic regimens with the attending and fellow residents. 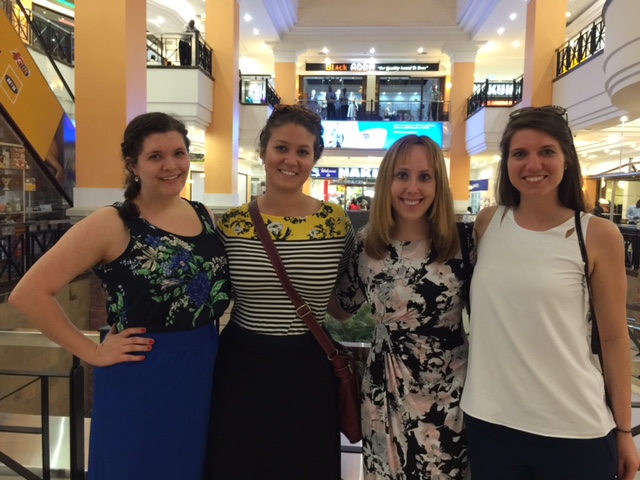 I bet you could never guess this mall was in Uganda if we didn’t tell you! You can’t really see it in the picture, but it has an indoor waterfall behind the women.

It was a hard decision, but we passed up this KFC (open until 3am) for a lovely little cafe (pictured above)