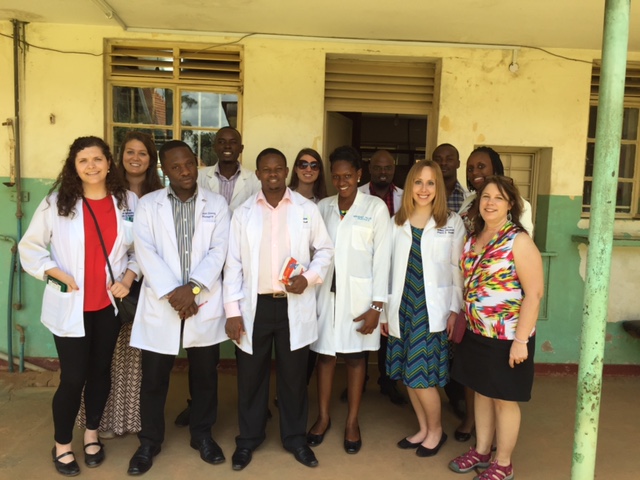 Pharmacy Interns and Carole, Head of the Pharmacy, with the Wilkes Students and Dr. Bohan

It’s Mengo Monday! This was our first day at Mengo Hospital, a private hospital with a fee-for-service model. Each of us went to a different ward with one or two of the pharmacy interns to demonstrate how we learned to provide pharmaceutical care. We showed them how to review patients and what information is most important to look for in the charts in order to identify drug-related problems. The interns were very interested and excited to practice clinical pharmacy and use some of the skills and tools they learned from Dr. Bohan like I ESCAPED CPR. In this hospital, I was happy to see more accurate notes in the charts, documented vitals, medication administration records, and especially curtains around the patients’ beds to provide more privacy. Kassi, Makenzie, and Casey went to the women’s, men’s, and pediatrics wards.

I worked with an intern in the private ward at the Sir Albert Cook building. The first patient we reviewed was admitted for heart failure. The intern and I discussed the new medications with the patient and also gave non-pharmacological recommendations. The second patient was admitted for cervical lumbar pain, and we wrote a note with recommendations for adjusting her pain medications. This patient was 87 years old, which is the oldest patient we have seen so far in Uganda. When I was talking to the patients’ caregivers, I was surprised that they knew English but still could not understand me because they said I had an accent. The intern had to “translate” what I said, but he just repeated it again in English.

Wilkes Students with Paul, the leader of the 3rd Year pharmacy class at Makerere

Then, we went to Makerere University and had the chance to meet some pharmacy students there. Everyone was so welcoming, and it was interesting to compare our pharmacy programs and opportunities available after graduation. Later, Makenzie and Kassi went to Gonsha’s community pharmacy. Casey and I went to the Uganda Cancer Institute (UCI) to meet the oncology pharmacist, Benjamin. This institute provides outpatient chemo to adults and children and performs some minor surgeries. UCI is very new and modern, and Benjamin said even the patients do not want to go home. Although it seemed very similar to hospitals in the US in many aspects, we were surprised by a few things that Benjamin told us. Instead of using a hood, intrathecal methotrexate is just drawn up at the bedside. Also, the radiation machine at UCI recently broke, and it will not be able to be replaced for 2-3 years. This was the only place in East Africa with affordable radiation so people from all over the area came here for treatment.

Through interacting with the pharmacists, interns, and students today, I discovered a general theme that they were all motivated to improve and advance their practice, provide direct patient care, and overcome the obstacles of their healthcare system.

This is Lauren’s lizard friend. She was a little scared of it so she stayed far away and it photo is blurry, but you can get the size of the beast. (it was way bigger than Makenzie’s lizard, fondly named Terry.)

I also have a story from one night last week. Anyone who was near my room heard a loud scream around 10:30pm. I came back to my room to find a large lizard on my ceiling! I am the worst person to deal with any kind of bugs or reptiles.

This is a picture of the lizard in Makenzie’s room, which occurred before Lauren’s lizard sighting. It was smaller than Lauren’s but the photo is a bit clearer. Makenzie named him Terry.

Luckily Makenzie came to help me get the lizard out. The ceiling was too high to reach so she swung my mosquito net towards the lizard. First it ran in the opposite direction of the door and was hiding in the curtains. After a lot of net swinging, it finally fell off the wall and ran out of the door. I need to officially thank Makenzie for rescuing me from the lizard, and I hope I don’t have another lizard attack anytime soon!