A Visit to the Ziwa Rhino Sanctuary, Uganda

Casey, Makenzie, Kassi, and Lauren with 2 of the Rhinos in the background

Today we took a trip to the Ziwa Rhino Santuary which is only about 40 minutes from Masindi, along the Kampala Road. Rhinos used to be native to Uganda in the Murchison Falls National Park but by 1983 they became extinct due to poaching. The Ziwa Rhino Sanctuary is a 70 square kilometers of bush that is fenced in its entirety and was developed to grow a herd that could eventually be used to repopulate Murchison Falls National Park.

They currently have 16 White Rhino, of which 10 were born in the park. They need to have a herd of 30-45 before they can start efforts to re-populate Murchison Falls.  The White Rhino is so called due to a pronunciation error by British colonizers. The story goes that the Rhinos are called a name that sounds like “white” but really the word is “wide” but the British heard the name as “white” and so this breed has been called that ever since. The “wide” name was because of their wide mouths.  The color of these Rhinos is actually grey although they looked brown to us because they roll around in the mud to stay cool. Today we drove about 10 min down a red-dirt road where we parked and then hiked about 15min into the bush, through grasses, small bushy trees, and over very bumpy ground until we came upon 6 Rhinos resting in the shade. Since the day was a bit overcast, their were 2 Rhinos actually standing and moving around grazing. Usually the Rhinos lounge around all day in mud puddles and under the shade of the bushy trees to keep cool. But when the sun is behind clouds they do stand up and graze. But most of their feeding comes at night as they roam the entire park. Our very knowledgeable guide, Edward, helped us move around the herd at a safe distance but brought us to a number of different angles so we could get great pictures of the Rhinos.  It was so cool to be so near these giant creature. To us they looked pretty gentle, but we were told that when spooked, they can definitely run and gore you with their horns. Our instructions prior to trekking to the spot of the Rhinos was to go and hide behind a tree or better yet, climb it, if the Rhinos start to run our way, although the guide assured us that wouldn’t happen.  But, we closely followed every instruction of the guide.

We had a delicious lunch at the Sanctuary after trekking to see the Rhinos. Note the “Beware of Rhino” sign on the tree behind them.

As we drove to the Rhino Park, we came upon a shepherd leading his Ankole Cattle along side of the road. These animals are so interesting to look at. They are beef cattle and their horns can be melted down and used to make eating implements and bowls, etc. 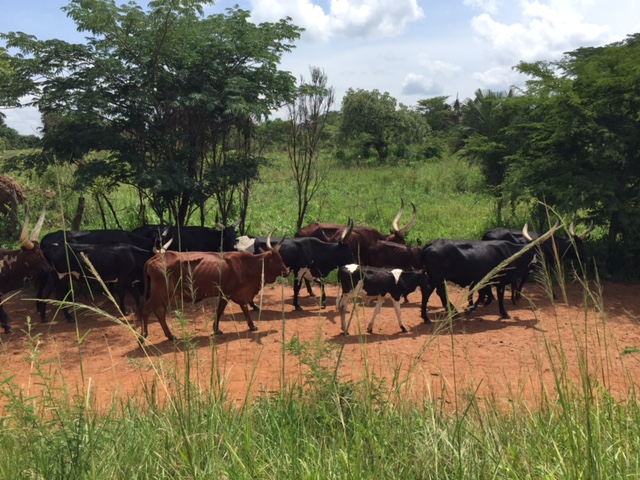 These are Ankole Cattle

We also came upon a bunch of Verret Monkey’s as we entered the Rhino Sanctuary and saw a couple of tortoise’s on the road on our way out of the Sanctuary. (I usually refer to this type of creature as a turtle, but I found out at the animal park in Jinja that this type is actually a tortoise and a turtle is the kind that lives near water and has webbed feet. So the little guy pictured is definitely a tortoise.