A Meeting with the New Pharmacy Interns in Kampala

Usually the Pharmacy Interns start working at the beginning of August each year. This is a year of experiential learning that takes place after graduation from University (although the students are done as of May, the actual commencement ceremony isn’t until January, at least for Makerere University) and completion is required before they can take their Registration examinations and become licensed Pharmacists. This year the start of Internship was delayed for all interns, Pharmacy, Medical, and Nursing, due to a disagreement about payment with the Government.  That has finally been resolved so the Interns went back to work this week.  Today we got a chance to meet with them and remind then about their role as Pharmacists and their many and varied duties at the hospital. I wanted to reinforce the clinical aspect of being a pharmacist. All of the Interns knew they would be responsible for dispensing drugs and placing drug orders but they also have valuable skills they can use to improve patient care.  I also basically gave them a pep talk about how they could implement some very simple things and really help the doctors, nurses, other healthcare professionals and patients. I reminded them of the importance of developing relationships with the other healthcare team members. This is the first step in a good working relationship. And of course I mentioned the need to “keep time”.  This is the terminology they use to mean they should show up on time.  “You won’t be able to use your knowledge to improve patient care if the doctors can’t rely on you to SHOW UP!”  I especially want them to communicate with their Intern Supervisors if they are going to be late and to inform those clinicians on the wards.  They will not be respected until they can be counted on to show up.   It was great to see so many familiar faces among the crowd of Interns today. This is the first group, at least those from Makerere University, that took both years of the class I teach – Pharmaceutical Care Skills Lab.  I get to come back in April with more students and I will be eager to work with them and see how they are using their skills.

Gonsha discusses the process for weekly case presentations with the Interns 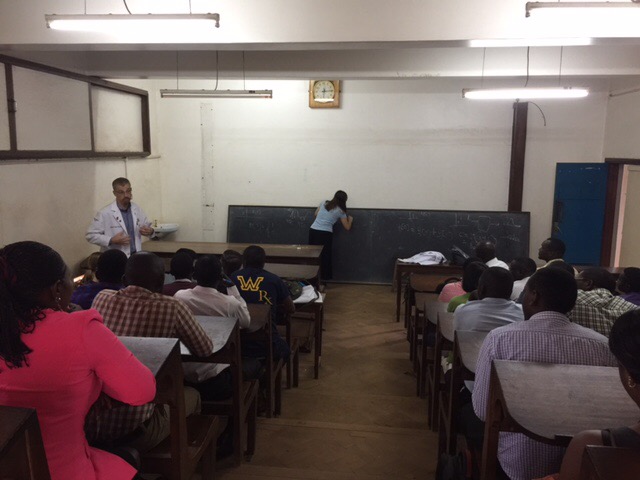 Gonsha talks with the Interns 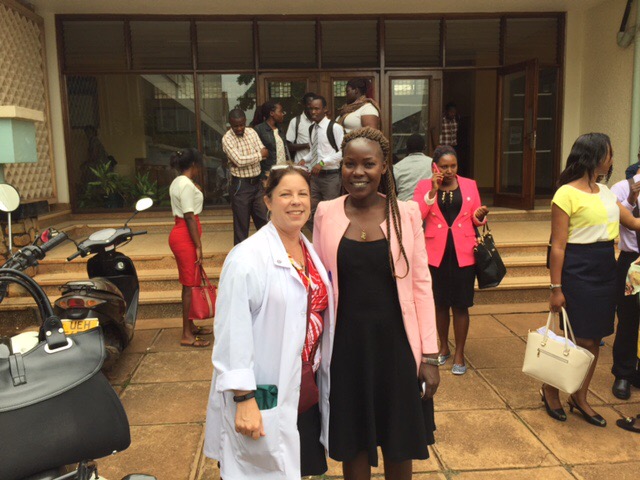