Watch carefully and see the torrents of rain spew over the railing onto the walkway at the end of the hall at Mulago Hospital.

This is my 5th trip to Uganda. The first was in June/July 2011, which is dry season, although we did occasionally have a light rain. During dry season, red dust ends up coating everything, homes, plants, and your clothing. When we had a light rain, all were thankful for the dampening down of this dust. It is also generally hotter in dry season, although still usually just up to the high 80’s. The rest of my trips have been in the “rainy” season, Sept 2012 & 2013, March 2014, and now Aug/Sept 2014. But, during my past trips I realized that “rainy” is in the eyes of the beholder. I always thought in Africa, the rainy season was a time when it would rain all day, everyday, and you could never get fully dry. During visits 2, 3, and 4 I learned otherwise. In fact, I, like the locals, have really enjoyed rainy season. It gets cooler at night, into the 60’s, although warm in the 80’s during the day and and the rain helps keep the red dust under control. It is only muddy during the downpours which never seemed to last beyond an hour. I likened them before to “Florida Rains” where you can have it be hot and sunny when you go into a building and then when you come out, you realized it rained but then everything dries up quickly. But, this year, although only a week into my trip, it seems different. According to the locals, it is also a bit unusual. December is normally the rainiest part of the year for them but currently it has been raining every day. It might start off sunny but then there is a good, really soaking rain storm in the middle of the day lasting an hour or two and creating lots of mud and treacherous walking conditions. And the rain has been hard and blustery – you really wouldn’t want to be out in it. Sometimes it rains at night and you feel like the luckiest person alive to be under a solid roof and dry. Yesterday, though, in addition to the thunderstorm and sheets of rain, it continued to rain more lightly the rest of the day and evening. The good news, though, is the nice cool weather at night which makes sleeping very comfortable. When it doesn’t cool down, I sleep all night with a fan, which fortunately is provided for me by my wonderful accommodations.  I hope, though, that this type of rain goes away soon and it gets back to the “normal” rainy season for Kampala, Uganda so the walking situation becomes less difficult and my laundry can dry.  You actually only need a short time of Uganda sunshine to dry your clothes on a line, but recently that has been lacking. So for now, it will continue to hang all over the bathroom. 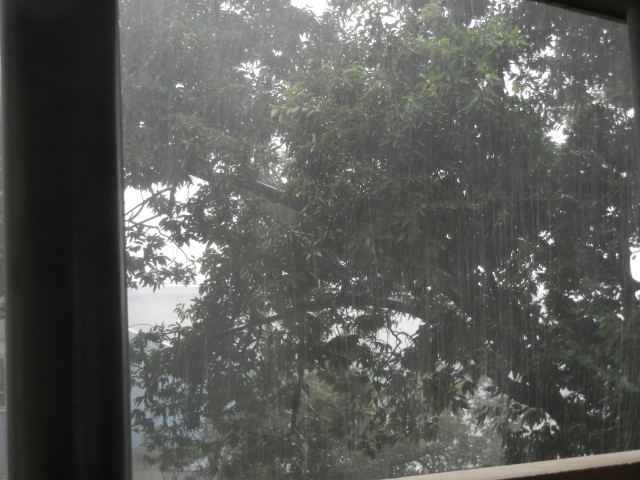 Addendum:  Late morning and early afternoon on Saturday did bring some nice, warming sunshine and my clothes were able to mostly dry until they had to be pulled down for yet another storm. Fortunately, I’m sure they will dry by morning as they are just damp now and are hanging all over my room on a new rope that my housemate put up for me.

1 Response to Rain and More Rain