A Trip to Jinja and Masindi, Uganda 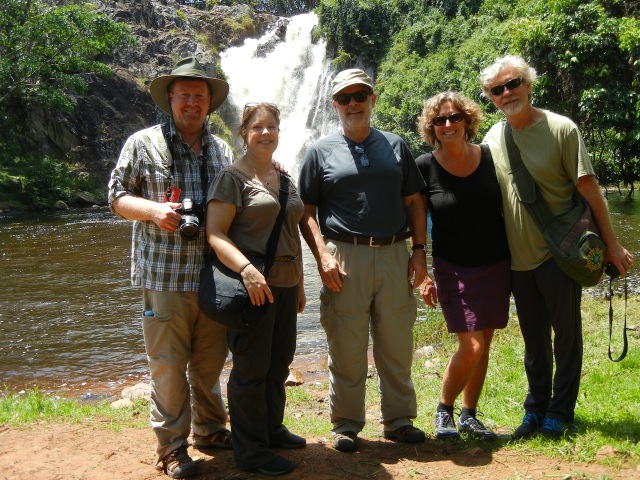 Over the past 2 days, I’ve been showing my husband, Jeff, my favorite places in Uganda and have been introducing him to all of the friends I work with while I’m here. He’s seen many pictures of these places but meeting the people and seeing the sights first-hand is so much better. On Tuesday we took a day trip to Jinja, Uganda, which is Northeast of Kampala to the Source of the great Nile River. Since my driver’s vehicle could hold more than just the two of us, I invited my housemate, Monty, and two other Fulbrighters to join us, Russ and Kiran, and true to the saying, more was merrier! We had a fantastic trip. 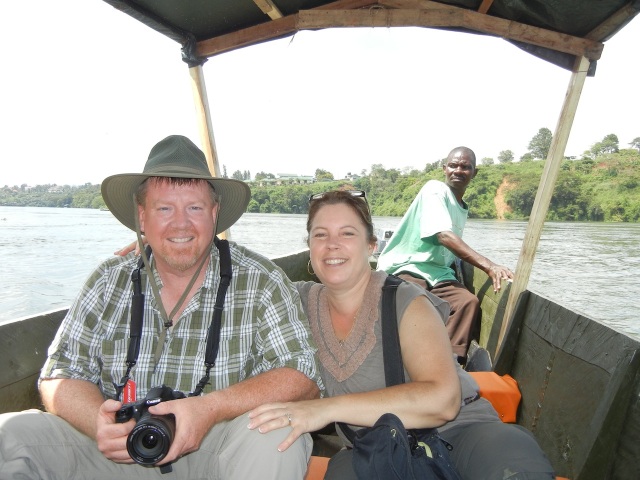 We couldn’t have asked for better weather and the guides for both Ssezibwa Falls and the boat ride to the Source of the Nile were great. We did split up for the late afternoon, though, and Jeff and I headed to the Jinja Sailing Club where we ate a delicious, slow-paced meal right on the shores of Lake Victoria, while the others explored the shops of downtown Jinja. 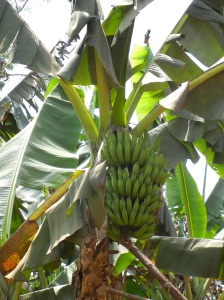 Banana Tree by the side of the road

We didn’t leave the area until about 6:30pm which landed us in pretty bad traffic. By the time we reached home close to 10pm, we were ready for bed. But, since Jeff and I were leaving Kampala in the morning for the rest of our vacation, we had to stay up quite a bit later to pack.

A Monitor Lizard at the Source of the Nile

KarenBeth and Jeff at the Source of the Nile River

Bright and early Wednesday morning at 7am we were ready and awaiting our driver for the trip to Masindi. Sam, my trusted driver on the Masindi leg of my trips since 2011, drove to Kampala with a friend to pick us up and finally arrived at about 8am after a delay due to traffic. You have probably realized a recurring theme: traffic is a major issue in and around Kampala. Anyway, once on the road, having said goodbye to my Kampala friends, Jeff and I headed for Masindi, but first stop, Ziwa Rhino Sanctuary. White Rhinos, which are the type this sanctuary houses, used to be native to Murchison Falls and other parks in Uganda, but due to poaching they became extinct.

This park is trying to raise and protect a large herd so that they can eventually be released back into their own native habitat. Protecting them, even while in the sanctuary, is no easy feat. Poachers can be ruthless and try many things to gain access to desired animals. The Ziwa Sanctuary has a fleet of armed guards that track the Rhinos and chronicle their behavior day and night both to make sure they are safe, but also to learn more about their lives. For example, they are able to know when mating occurs and if the procedure lasts at least 45min, they know the activity was successful. Well, maybe that was too much information for you, but they are really able to learn a lot about the Rhinos. 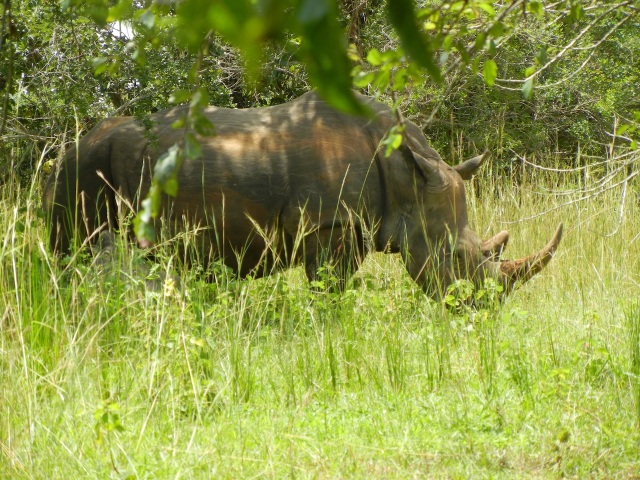 The Rhino Mom is standing up nursing her baby

After Rhino Trekking, we headed on to Masindi where we checked into the hotel where I always stay. It was so cool to be recognized by name and welcomed by the staff there. I also wanted Jeff to meet the people I work with at Masindi-Kitara Medical Center so I had emailed them a couple of weeks ago to check on stopping by. We were greeted very warmly upon arrival and the Business Manger gave Jeff a detailed tour of the facility, which is quite nice compared to the District Government hospitals and clinics. Again, it felt so good to be among friends and I look forward to working with them next April when I bring my US pharmacy students.

One of the last stops for the day was at the Orange Mobile Phone store to get more airtime minutes. The purchase went smoothly, but as I was leaving the store, a diminutive older man yielding a wooden stick that looked like a cane assaulted me. I was pretty much in shock. He only barely touched me with the stick but right away went to strike again. Jeff was thinking quickly and went to intercept and as he did the whole episode came to the attention of the people inside the shop. A man ran out and scared away the one with the stick, although he had to exert some amount of force to do this. All the while the attacker was speaking in a language I didn’t understand so I asked my driver later what he was saying. Sam said this was a guy who is known to be “crazy” and he was shouting something like “You are all going to pay, every last one of you.” Well, to say the least, that was a bit unnerving but it ended well with no one hurt. Despite this, we truly did have a lovely day and ended it with a huge meal at the New Court View, the place where we are staying but also the best restaurant in town. I had the sizzling beef dish that my past pharmacy students know very well and Jeff had the whole deep fried tilapia fish. This fish is local and right out of Lake Victoria. I know how delicious it is, despite seeing the head and tail and all of the fins, as I had it yesterday for dinner at the Jinja Sailing Club. Tomorrow, on to Murchison Falls National Park and our animal safari.

1 Response to A Trip to Jinja and Masindi, Uganda