A Visit With Pharmacy Interns at Mengo Hospital 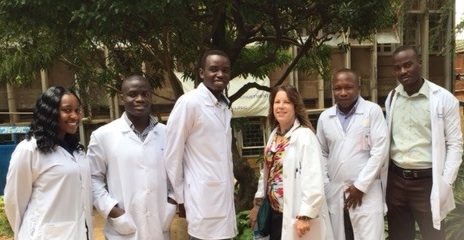 If you remember, last Monday I took a visit to two private hospitals, Nsambya and Mengo. I was able to participate in Ward Rounds with the Pharmacy Interns at Nsambya Hospital but at Mengo, I gave a presentation on the Implementation of Pharmaceutical Care. I urged them to begin to try interacting with some patients to obtain a medication history and also to review some charts for possible drug therapy problems.  Today I was back to Mengo both participate in Ward Rounds with the Interns and to check up on what they accomplished last week in terms of pharmaceutical care interventions. I was pleased to find that a couple of the Interns had identified and helped to solve some specific drug therapy problems, such as a patient taking 2 ulcer medications at the same time from the same class of drugs and the physician had positively responded to her suggestion to stop one. This same Intern had also identified a significant drug interaction with a blood thinner, Warfarin, and another drug, Fluconazole, which if this went undiscovered, the patient may have had a serious bleed. In this case both drugs were necessary so the Warfarin dose can be decreased until the Fluconazole is stopped.  I reminded the Interns, though, that it is very important to keep following up on their patients after making recommendations. She will need to make sure the patient continues to do OK on both Warfarin and Fluconazole and make sure the drug doses are adjusted when the Fluconazole is stopped. If this doesn’t occur, the opposite problem could happen and the patient could have too low of a dose of Warfarin and have another blood clot.

The Worship Service was just finishing. What a nice way to start a new week!

The morning started with a worship service at the chapel on the hospital campus. Mengo Hospital is a faith-based Anglican Hospital that was started as part of the Missionary work of Dr. Sir Albert Cook in 1897 and it was the first hospital in Uganda. Carol, the Pharmacist, was supposed to lead the praise and worship music at the beginning of the service but she had to pick me up and thus got caught in a big “jam” (this is how they refer to traffic jams) so we didn’t arrive until the sermon time. At the end of the service, though, another song was sung which I was happy find familiar and was able to sing along by heart with “Jesus, My Redeemer”.

A view of the Mengo Hospital Chapel from the outside

After worshiping, we went to the Pediatrics Ward and started to go around and talk with the patient’s caregivers to see if there was anything we could suggest to help improve care. I had some good discussions with the Pharmacy Interns about antibiotic spectrum of activity (what organisms the antibiotics treated) and how to treat Pneumonia and Otitis Media. There are a couple of very important issues that make it hard to know what antibiotics to use to treat infections in Uganda.

First of all, there is little published data on what microorganisms are responsible for causing bacterial illnesses in Uganda. We generally assume the causative agents are similar to those in the USA and use similar antibiotics but this really should be investigated so we know for sure. For instance, besides the normal bacteria that cause Pneumonia, in the USA we also have some “atypical” bacterial organisms that need to be treated as well in the initial regimens but this child only was treated for the normal bacterial organisms.  The child with pneumonia was improving on the antibiotic regimen so that was good, but I still think more studies need to be done to figure out what organisms are most common in Uganda for each type of infection.

Wendy and Robin look up drug information in his smart phone. One of the things I’ve been working with the Pharmacy students and Interns on is the use of point-of-care medical apps on their phones (most do have smart phones now days)

The other issue, and probably the more critical one, is that there is also little data on the antimicrobial susceptibility and resistance patterns in Uganda.  And the small data I’ve seen is dismal with extremely high resistance rates for the most commonly used Antibiotics.  In the USA we have this information and put it together into what’s called an Antibiogram, a list of all the organisms cultured in a hospital and information about what antibiotics will kill those organisms. This is important both so we can follow the resistance patterns and make sure we are not starting to get highly resistant super bugs, but also to help us decide what initial treatments will work best for our patients.

Another HUGE issue in Uganda is that patients can get antibiotics at the Pharmacies and Drug Shops without prescriptions from a Physician. Although they are supposed to be on a prescription, reality is that no one is able to enforce this so it is very common for patients to go to Drug Shops or Pharmacies and ask for Antibiotics or Antimalarials and be given them. 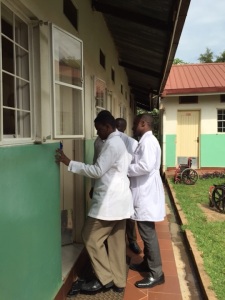 The Interns have just arrived at another patient’s room and are getting ready to go in and interview the parent of a 4 year old boy.

The reason Drug Shops are allowed to dispense Anti-Malarials and Antibiotics without prescriptions and without supervision by Pharmacists is to meet the needs of the patients living far away from medical centers. The idea was to prevent deaths due to infectious diseases which could occur when patients couldn’t get to regular medical centers. But, I wonder now if these Drug Shops, and actually the Pharmacies as well, are starting to contribute to the high resistance of Antibiotics in Uganda and maybe causing more harm than good at this point. Ideally, the people working in the Pharmacies and Drug Shops would have excellent skills at triaging a patients symptoms and have a good understanding of when the symptoms are serious enough that the patient should be referred to a health clinic and not given an antibiotic and to also know when an antibiotic is not needed, such as when the signs and symptoms are more consistent with a viral infection. But, I’m certain that this isn’t often the case. I’ve talked to many pharmacists and students working in these Pharmacies and most often what occurs is that a patient comes in and either asks specifically for what he or she wants and it is given without question or the patient states the symptoms and the worker chooses the antibiotic he thinks is appropriate.  I’ve been told that Pharmacy Workers are discouraged from telling patients that they don’t need an antibiotic because they may have a viral infection where an antibiotic doesn’t work just because the Pharmacy Owner, usually a business man, wants to make money. I’ve even heard stories from Pharmacists who were told NOT to come to the store because they may not sell as many unnecessary drugs as the other untrained workers in the store.

What I think many people don’t understand is that this practice of just dispensing Antibiotics without much thought or testing is soon going to render many of the cheap Antibiotics useless because of increasing resistance.  There needs to be a campaign within Uganda and other developing countries with similar practice to help both healthcare providers and patients become aware of this problem and urge them to stop requesting antibiotics for viral infections. The Centers for Disease Control (CDC) has done this in the USA.  I’m not sure how this has affected the rate at which patients demand Antibiotics from the physicians when they are sick, but those that I work with back home have become much more resistant to prescribing antibiotics when the infection may be viral and go away on its own. 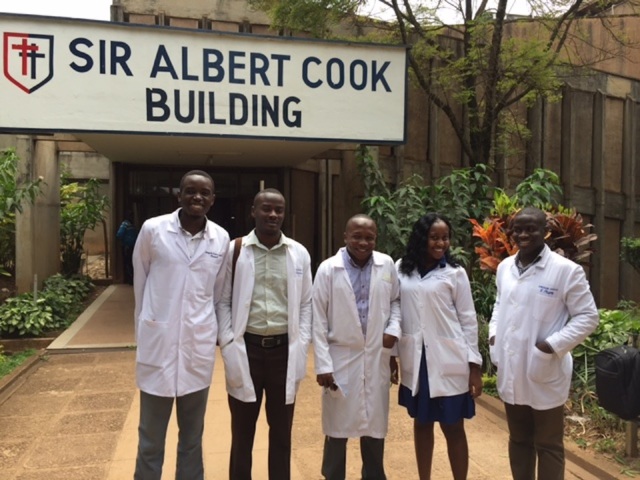 The group of Interns I worked with today: Sam, Isaac, Robin, Wendy, Hassan (left to right)

Back to one of the patients we saw today at Mengo. It was an adorable 11 month old girl who had developed a cough and fever a week ago. Initially the parents just went to a Drug Shop and got an antibiotic for the child but after 5 days, the child was no better and they brought her to Mengo Hospital. This is a classic situation where the child should have been referred to a medical center from the beginning. Young children can go from a minor infection to a severe one very fast, especially if they get dehydrated. There were 2 things going on with this patient that made me worry about this possibility. First of all the patient had a high fever which can cause sweating and fluid loss. In addition, she had vomiting and poor feeding. We didn’t get a chance to question the mother about the conversation she had at the drug shop but I doubt that the worker gathered this type of information. The antibiotic was probably just dispensed. If this information had been obtained, the child should have been referred. Also, the antibiotic was actually dispensed on the second trip to the Drug Shop. The first time the mom just got paracetamol for the child’s fever (acetaminophen) but it wasn’t working to take down the temperature and the child was coughing more severely. At this point the child should have definitely been referred, but instead an antibiotic was given. Fortunately the child was finally brought to the hospital but had this occurred days earlier, the child probably would have responded to therapy more quickly. When you have Pneumonia, antibiotics alone may not cure it. The patient needs to have appropriate supportive care like fluids to replace those lost during fever and vomiting and the patient may also have other components to the illness like wheezing and may need something to open up the lungs (brochodilators).

As you can see, I had a really interesting day.  I’m so glad the Pharmacist and Interns at Mengo Hospital want to become more engaged in direct patient care. I’m sure their work together with the Medical Team of Physicians and Nurses will be very helpful to improve patient care.