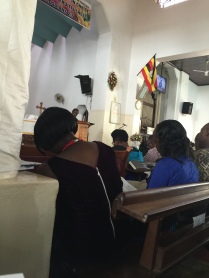 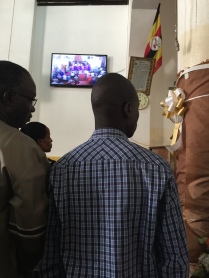 We all had a fantastic weekend. Normal work was put aside and on Saturday we took a leisurely trip to Jinja, the Source of the Nile River.  I will post a photo collage later today to tell that story. A few of us had the opportunity to go to an Anglican Church on Sunday, All Saints in Nakesero, Kampala, with a friend of mine. The order of worship and liturgy is very similar to the Episcopal church, which is similar to my home church, Lutheran, and also to Roman Catholic. But, worshiping in Uganda is a pretty different experience from worshiping in the USA so I want to highlight a few of the interesting distinctions.  First and foremost, this service was lively. The music was upbeat, the choir sang as they danced and ad libbed to the songs, the congregation was on its feet and you couldn’t help but clap and dance and sing along.  The service is projected on screens on both sides of the front of the church. I was very thankful for that because I was sitting next to a pillar which blocked my view of the alter.  I was able to see on the screen the clergy and worship leaders and at the same time read the words to the hymns. I’m not sure how they did it, but they were able to superimpose the lyrics on top of the video of the service- great technology.

Then there was the large number of people present. It is rare in the USA to see a church service packed to the gills so that people need to also pack full a covered tent outside. After the service we spoke with one of the worship leaders and he said the congregation is about 7000 and at our particular service there were between 1500 – 2000 people. They have 3 additional services as well on Sundays and one on Wednesday evening.

Another interesting thing was that a woman who was having her 60th birthday came forward with her large family and brought extra offerings (money-donations to the church to carry on the work of God) in praise of God for her Birthday and wonderful life. Can you imagine this happening in the USA?  Once you get past a certain age, we tend to hide it and I’ve never heard of anyone at any age who actually stood up in church to thank God and give offerings to the church.

At every church service there is a time when the “Bans of Marriage” are read.  One of the students had thought this was a reading of people wanting to get a divorce, but it is actually the opposite. When a couple wants to get married, they tell the church an it is announced as the 1st time of asking to be married. These are read aloud and if anyone in the congregation has a reason the 2 should not be married, then they can speak up. Now I’ve never heard anyone speak up but I’ve asked Ugandan friends and was told that this does happen. An example would be if the man was already married to a woman in a different village. This process actually happens 3 times (2 more times of asking to be married) before the church will grant the wedding.

At the announcement time, the Pastor told the congregation that offerings can now be accepted by Mobile Money.  This is a financial process that has really enhanced progress in Africa. Many people here don’t keep their money in bank accounts which may require a minimum and charge a fee. But Mobile Money is where you can add money to your phone and then send it to anyone or pay bills at the supermarket or pay your utility bill, and now even pay the church your offering. My driver, Haji said that it is more convenient than the bank because these MobileMoney kiosks are everywhere. You can even keep really large sums of money safely in your phone account.  I wish we had this in the USA.

Finally, there was a woman at church who gave a testimony about how God has watched over her and saved her numerous times in her life. Most notable was when she was abducted then shot in the head and left for dead. This happened many years ago and although her body was brought to the hospital to be sent to the morgue, a Ugandan surgeon attempted to remove the bullet and was successful.  But, it left the woman in a coma for 5.5 months.  No one thought she would ever wake up and have a productive life, but she did. She regained her intellectual and physical capabilities and has been serving others in thanks to God since then. What was amazing is that even though I’m sure the surgical facilities were much lacking as compared to the Western world, the surgeon was obviously very skilled and was able to save her.

We also went for coffee at a local place that roasts their own beans, to craft shops and to dinner at a beautiful restaurant overlooking Lake Victoria.

2 Responses to A Ugandan Worship Experience